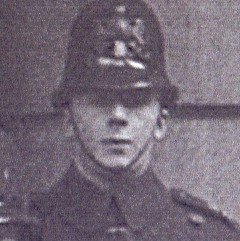 On the City of London Police War Memorial to those who died in the Second World War will be found the name of PC 103E Carley.  The story of how he came to lose his life is told below.  I am grateful to Brian Palmer, a relative of PC Carley’s, for providing the photographs used in this article and for sharing additional information about Henry’s life.

Henry – known as “Harry” – Carley was born on 3rd May 1916, and joined the City of London Police on 4th February 1937, aged just under 21.  He was posted to Snow Hill Police Station and by 1939 he was working as a detective.  When war came later that year, he remained in the City Police, and started to undertake some of the new tasks assigned to police officers, including identifying victims of the Blitz.   Harry was involved in this work, part of which could involve breaking the fingers of some of the casualties in order  to take their fingerprints.  He was so affected by this he resolved to join up as soon as he could in order to “give some back” to the enemy.

And so, on 30th March 1942 he joined the Royal Air Force.   He was first promoted to Flight Sergeant and later received a commission as a Pilot Officer (Navigator).  Having been posted to No 192 (Radar Counter Measures) Squadron in 1945, 7th March of that year saw him assigned to a Halifax Mark III (MZ932) for an operation to Dessau north of Leipzig.  The flight had both a navigator and a wireless operator aboard and Carley is shown as a “special operator” in the operations record book.  Harry was a German speaker and part of his role involved broadcasting messages in German designed to confuse enemy aircraft.

Harry Carley while training in the RAF

Having taken off from RAF Foulsham, around three and a half hours into its flight the Halifax was attacked.  Its nose was severely damaged, the port inner engine was put out of action, the inter-communication and oxygen systems were rendered useful and other important equipment was destroyed.  The aircraft dived out of control, but the pilot, Flight Lieutenant Ford, was able to level it out and headed for allied territory, successfully navigating his way to an airfield at Rosiere, Meurthe et Moselles and crash landing there.

During the fight to keep the aircraft airborne, Carley and the two gunners had bailed out 45 miles south west of Brunswick.  The front gunner and Carley were captured.  Carley’s family was later told that he had tried to escape, and was shot and killed in the process.  However, another, rather different, version of events subsequently emerged.

By November of 1945, the City of London Police News Letter (a monthly bulletin to members in the forces ) reported that a French Prisoner of War had written to Carley’s widow.  As the leader of the French POWs he had more liberty than the others and, having heard on 8th March 1945, that an English airman was in the local hospital, he managed to visit him in secret.  The airman was called Robson and he had been abroad the same aircraft as Carley.  He had been severely injured during the attack by the German fighter and had bailed out.  He had no idea what had happened to the other aircrew.  Robson told the Frenchman that the Germans were puzzled as they had found no aircraft within 50 miles of Arolsen.

The French POW then found a new grave in the churchyard and learned it was the grave of an English airman who had parachuted down on 8th March and was shot while attempting to escape.  The Germans had buried him in the name of Chorley.

Continuing with his enquiries, the POW learned that the grave was actually that of Pilot Officer Carley.  Having parachuted from the aircraft, he had landed at a place called Kulte, four miles from Arolsen.  Carley was captured and was subject to interrogation by the SS.  It is believed that Carley, captured with no sign of a crashed aircraft in the vicinity, was treated by the Germans as a “parachutist” and so was handed to the SS for questioning before being “disposed” of.  Carley’s adamant refusal to give any information so enraged an SS officer (Sturnmannfuhrer Otfried Helwig) that he drew a revolver and shot him in the chest.   He was buried the next day in the churchyard at Arolsen.

The Frenchman subsequently passed the information to the American Military Government in Arolsen, and also left money with a gardener in the town to ensure Carley’s grave was well kept with plenty of flowers.  Following the war, the incident was logged as a War Crime allegation and investigated.  Various witnesses made depositions, including SS officers and the accused, there was even a trial, but this returned a verdict of Not Guilty.

A slightly different version of how Carley died features in a book called “Footprints on the Sands of Time”.  There it is stated that Carley landed at Kulte and managed to get as far as a mill at Ehringen, about six kilometres away from his landing place.  There, exhausted, he stated he was RAF and wished to give himself up.  Arrangements were made for Luftwaffe security based around 35 kilometres away to attend to take him prisoner, but, before their arrival, a car arrived containing three SS officers.  They drove off with Carley in the back seat, after a while taking the car down a track off the main road, and stopping, pretending the vehicle had some fault.  Carley was allowed to stretch his legs.  At that point one of the officers shot Carley in the chest, later claiming that he had tried to escape and he had no choice but to shoot.  Carley was buried initially at Arolsen, before being moved to the Hanover War Cemetery where his grave is now tended by the Commonwealth War Graves Commission.

F/L Ford and F/O Coates were later awarded the Distinguished Flying Cross for their actions in landing the aircraft safely after the attack.