From the landmarks visible in the background of the photographs below (St Sepulchre’s Church for one), it seems that self-defence training in the City of London Police at the beginning of the 20th century took place on the roof of Snow Hill Police Station.  Some interesting techniques are on display in the photographs, together with some extremely impressive Edwardian moustaches.

Methods of self defence, including Jiu Jitsu, were the subject of some interest at the time, and there was much discussion on the merits of such “new” forms of self defence versus more established methods such as boxing and wrestling.

It wasn’t only the police who were to avail themselves of Jiu Jitsu.  Later, so did the suffragettes in an effort to counter police arrest techniques.

Interestingly, training in wrestling was still given to recruits to the “other” London police force, the Metropolitan Police, in the late 1940s.  There is a short film on it, which also demonstrates some other self defence moves, courtesy of British Pathe. 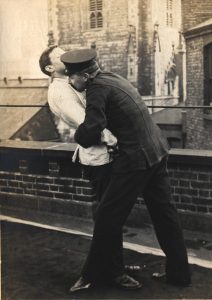 City of London Police self-defence training 1907. The tower of the church of St Sepulchre can be seen in the background 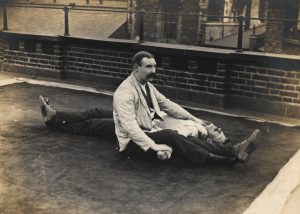 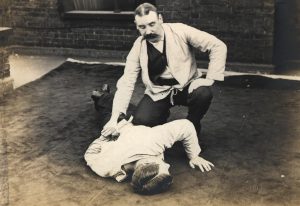 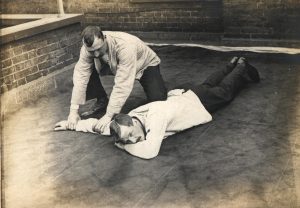 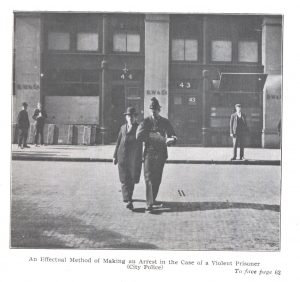 Technique for arresting a violent prisoner 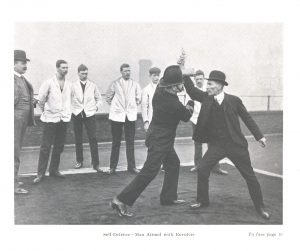 Self-Defence: man armed with a revolver 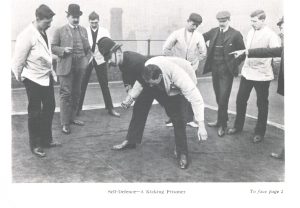 Self Defence – against a kicking prisoner

Defending against a kicking prisoner