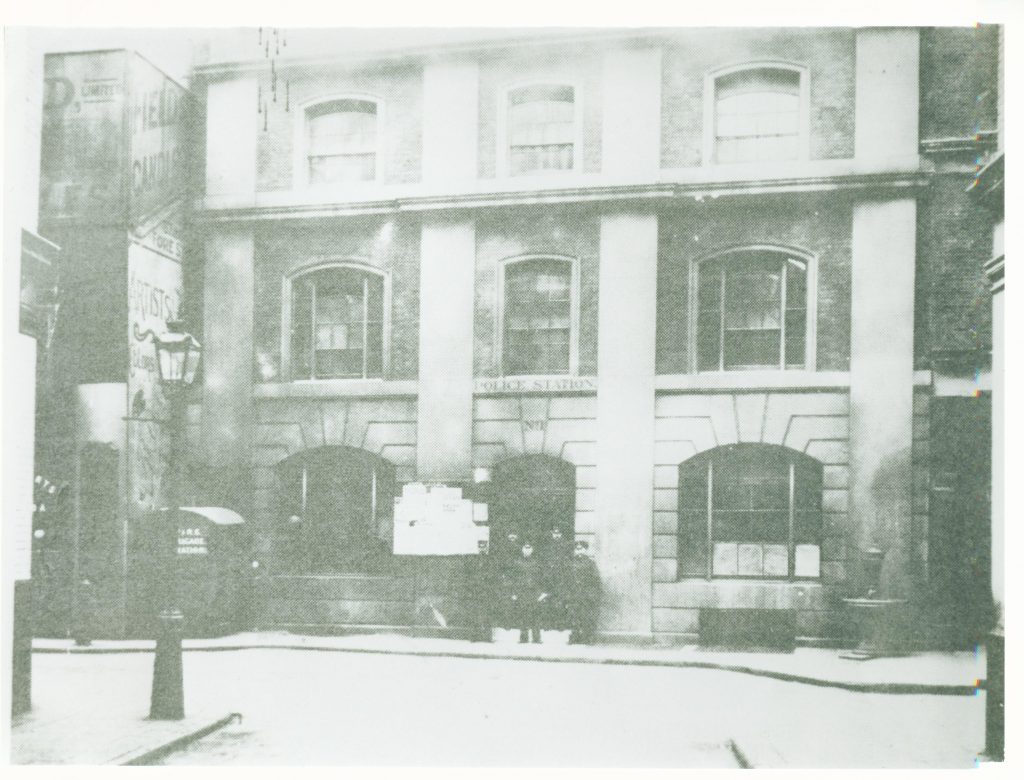 The picture above shows the City of London Police’s Moor Lane Police Station – probably in around 1899.  The photographer would have been standing in the middle of Fore Street Avenue looking towards Moor Lane. 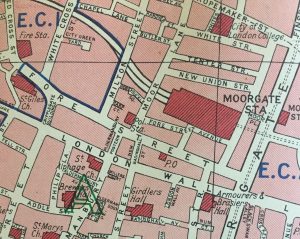 The Station’s Chief Inspector, his two Inspectors and Sergeants stand outside the front door.  To the left (south) stands John Gardener’s coffee rooms with adverts for “Field’s Candles” and “Artists’ Colours” painted on the side facade.  For those not of such a temperate disposition relief can be found just off to the right, in The Olde Whittington Beerhouse.  If you have spent an evening – or more – in there and require re-hydration, it is readily available at the public drinking fountain outside the police station.

Today it would be called something grand like “interoperability” – then it took the form of a small shelter, next to the wall of the coffee rooms, designated Fire Brigade Street Station 18B.  The small chimney pipe on top of the hut indicates that perhaps there was some comfort provided – a coal burning heater maybe for those cold winter nights when the freezing wind whistled so down the narrow City streets.  The hut would be manned between 8 pm and 7 am.  The fireman stationed there would be permitted to sleep, provided he kept his head near the alarm bell.  As the cramped hut also housed a hose cart, presumably his head was pretty near that too. 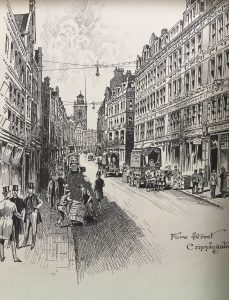 Fore Street, view west, 1910s when it was a leading shopping area. The junction with Moor Lane is mid-distance right.

Only a few years after the photograph above was taken, the police station was extended south.  In 1914, in a force re-structure, the station and neighbouring area became A Division.  Policing responsibilities included point (or traffic) duty at the junction of Barbican (now Beech Street) and Long Lane where the pointsman of A Division would spend the day working opposite the pointsman of B (Snow Hill) Division and ensuring business at the Barbican Horse Repository passed off peaceably enough.

By the late 1920s Moor Lane Police Station had all the amenities you could possibly want in a police building: large muster and mess rooms, cells, a full size billiards room, a large reading room and accommodation for 72 single men and the resident Sergeant.  Married quarters also housed the Chief Inspector in charge and his family.  Each year Moor Lane would host the “Single Men’s Smoking Concert” to which the crew members stationed at the nearby Redcross Street Fire Station would be invited.  There was apparently an ongoing robust exchange of hospitality between the police officers of Moor Lane and the firemen of Redcross Street (more interoperability), only interrupted “when the bells went down”.  At that point, festivities ceased as Monty, a former stray and now self-appointed firedog adopted by the fire crews, raced out barking madly, to take up his post in the front seat of the first vehicle out.

On the night of the 29th December 1940, Monty would have had plenty to bark about.  It was the night the second Great Fire of London visited the City.  Relentless waves of bombing by the Luftwaffe whipped up a firestorm that engulfed large areas of A Division.   Moor Lane Station was destroyed when a German parachute mine exploded in the building opposite.  No-one was killed, but 12 officers were injured, including the night duty Acting Sub-Inspector.  His life was saved by the two massive wooden doors that normally guarded the public entrance to his Station Office: blown off their hinges by the explosion they came to rest lengthways against one another, forming a tent like structure that now guarded what lay beneath: namely one rather surprised and dishevelled Acting Sub-Inspector.  As a result of the bombing, the rest of the Division – where much of the Barbican development now stands – didn’t fair too well either and was also largely reduced to rubble.  Ironically, Redcross Street Fire Station was one of the very few buildings to survive the night.

In 1943, three years after the night of the firestorm, the editor of the City of London Police Newsletter wrote:

“The only thing that happens most regularly on A Division is nothing.  Occasionally a new garden is brought into being by the untrained habits of visiting birds, and others are planted in the catacombs by hermits who are never seen.  Willow herb, meadow sweet, vetches and wild grasses grow best ….” 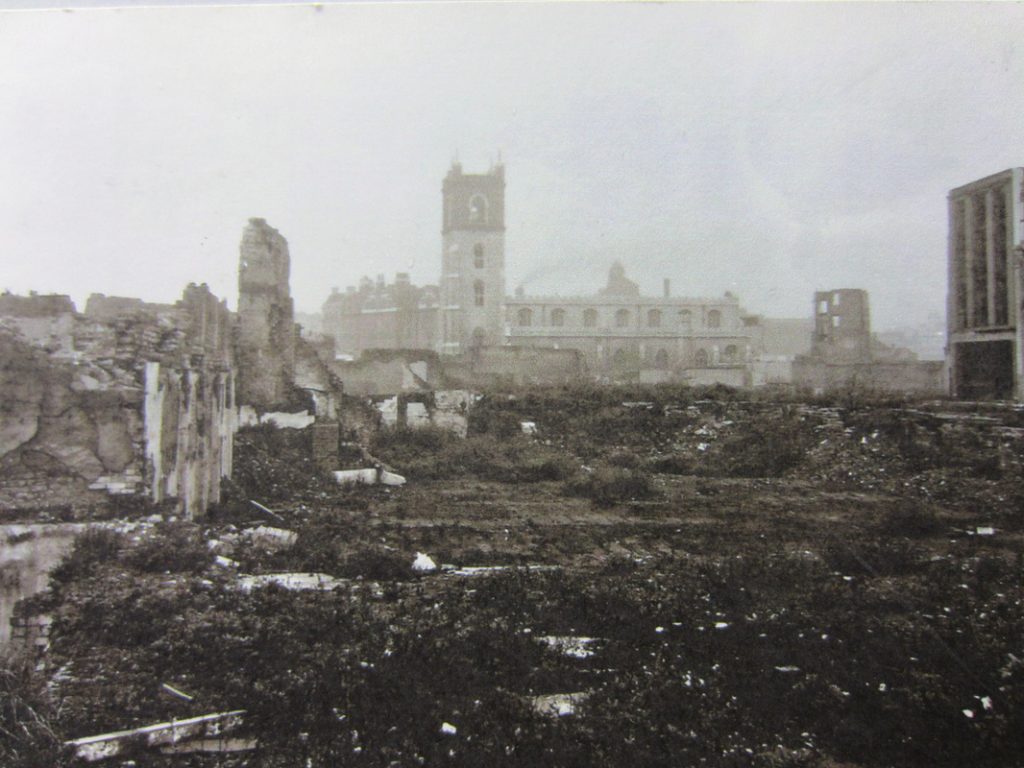 View of part of A Division, WWII, with what was left of Church of St Giles Cripplegate Without, centre

After the war when it became possible to speak of such things, it was announced that the largest area of continuous bomb damage in the country was the one stretching from the Barbican down to St Paul’s Cathedral, much of City Police’s old A Division.  In 1945 the Division was formally disbanded.  Its men were posted to other stations and its old beats were absorbed by the remaining City Divisions. 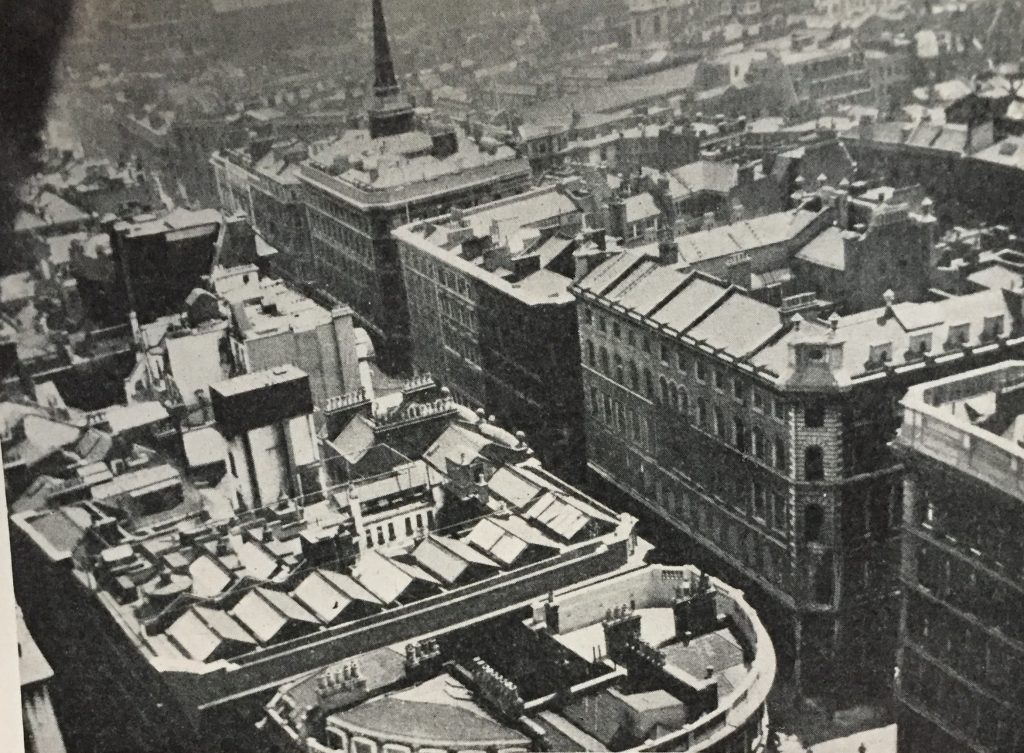 The same view along Cannon Street after the night of 29th December 1940. Near top left is the tower of St Mary Aldermary Church. Top right is the blackened remains of the roof of Cannon Street Railway Station with Tower Bridge behind it.