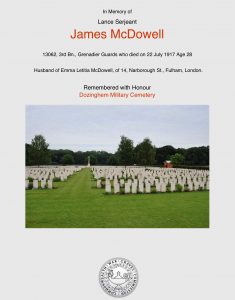 Previously served in the City of Liverpool Police, 4th May to 16th September 1910.

“Sir, re James McDowell, Your letter of the 5th inst has been duly forwarded here. The testimonials are authentic and the applicant is a very steady respectable young man and likely to make a successful Constable. He has been known to our Sergeant Hill of Connahs Quay for the past 7 year and he speaks highly of him.  I am Sir, Your Obedient Servant, R Yarnell Davies, Superintent, Mold, Flintshire Constabulary, 6th October 1910”